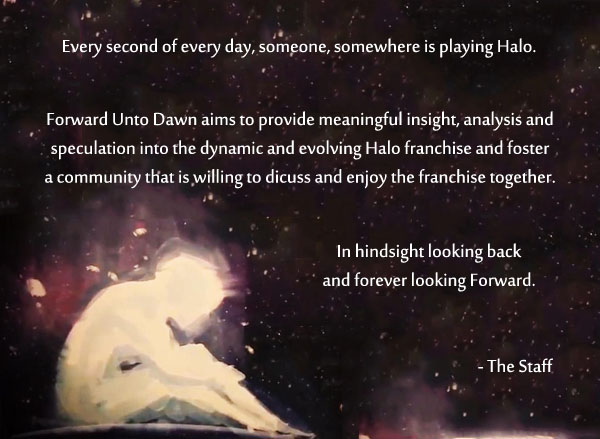 Forward Unto Dawn is an independent fan website and is not officially endorsed or sponsored by Microsoft, 343 Industries or Bungie. We are fans, just like you.

Slightly Live
A shy hobo that is occasionally seen in in public in the twilight hours of a day. This common specimen likes to spend his time foraging for knowledge on the internet, playing games and amusing himself with reading. The only staff member not living in the North American continent. Doesn’t like cheese or garlic. Selected published works include: Triumvirate and Defying the Odds

Fuchsdh (David)
Writer, artist, slacker. Having condemned himself to life in a cardboard box with his chosen profession, he distracts himself from imminent homelessness by writing about his interests. Backed by fond memories of co-op Combat Evolved, he is an administrator on the English Wikipedia and actively contributes to the wiki’s Halo articles. Selected published works include: Glimmer of a Dying Star

////RETIRED STAFF
GhaleonEB
Located in the soggy hills of northern Oregon, GhaleonEB has been an active community member and Halo (and thus, Bungie) fan since the first game. An admirer of Bungie’s sandbox combat design philosphy, Ghaleon is also a Forging enthusiast who likes to talk about Halo with anyone who will listen. A decidedly ancient father of two beautiful daughters, he wants to spend what time he has left in the company of like-minded friends and family. Loves garlic and cheese. Select published works include: Forging Ahead and Final Firefight

Postmortem
Originally hailing from the beautiful wilderness of Northern Arizona, he has since moved to the concrete jungle of Chicago, confining himself to a small box stacked on top of some other small boxes in order to focus on pursuing a career in video game design. Occasionally, packages are mailed out to FUD Headquarters containing words. Sometimes these words even make up articles. His personal blog is The Life of a Halo Fan. Select published works include: Rock, Metal and Time and Divinus Ruina