After last night’s Invasion and Boneyard début, we’ve attempted to gather up all of the new information available from the video clips and feature, summarise it and sprinkle it with some speculation.

Don’t take all of this fact. This isn’t the final word and all will be revealed very shortly. We had fun trying to put the pieces together.

This is the level on which you will exclusively play Invasion during the Beta. Boneyard will most likely appear later on in the Campaign due to the apparent Covenant destruction present in the environment – although this is not certain.

The map is set around a huge decommissioning yard and features a large industrial building which reclaims and smelts metal and a huge stripped ship. This yard is on the edge of a cliff overlooking a terrific vista beyond and dotted around the map are various hunks of scrapped metal, smaller buildings and a towering crane.

The ship itself seems to be the most prominent feature as firefights echo throughout the stripped bowels of the ship, along the scaffolding which frames it and beyond onto the yard below. The name of this relic is the Commonwealth, it’s battles forgotten, it’s glory past.

Across the vast skybox of Boneyard and just above the horizon, large flashes of light can be observed in the atmosphere above, illuminating the clouds from behind in various hues.

Invasion is a six on six objective game mode. Six Spartans attempt to defend their base against the invading six Elites across three “phases”. Each team takes a turn at both invading and defending.

Phase One – Dropping In

The opening phase see’s the Elites tasked with gaining access to the Vault. They cannot simply walk straight in, they must first gain control of specific territories scattered across the map. To capture these territories the Elites must spend time within a designated area until the area timer reaches zero. As soon as the game begins the Elites know where exactly they have to make a push. The Spartans will, obviously, try to stop them. They will know when the objective is under attack and will rally around to stop the invaders.

During this phase the available Loadouts, spawning weapons and Armour Ability combination are limited and a player may only choose from a small limited number of options.

When the Elites have gained control of enough territories (maybe two or three), the Vault opens and the next phase begins.

As Phase Two begins the Elites are notified of their success, the Vault is open and the treasure inside, the Core, is now able to be extracted.

The Elites must now journey to the Vault and take procession of the Core and then safely ferry the Core to it’s new destination.

The available Loadouts and vehicle selection ramps up during this second phase and more options are available to the player. The increase in options emulates the building rush of the Elite Invasion as things start to turn hectic. 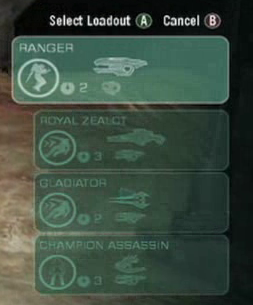 As the Core reaches it’s final destination, the failing Spartans must retreat briefly against a renewed Covenant onslaught. The crescendo of the mode heightens the fast paced firefight and takes it to it’s conclusion.

The successful Elites have penetrated deep into the Spartan’s defences. Reinforcements are called in; heavier arsenals are deployed by both sides. The Spartans have their backs against the wall but with rockets at hand and a Scorpion tank at their disposal they have one last chance to resist. The Elites need to annihilate their ultimate objective to clench victory, a (non-player controlled) Phantom hangs in the air having come over to the cliff edge.

The Loadouts and vehicle availability reach their peak of diversity and firepower. For both sides it’s the last push, all out destruction.

Framed against the backdrop of an Elite Invasion, this variant pits both sides against each other once again in the roles of Spartans and Elites. 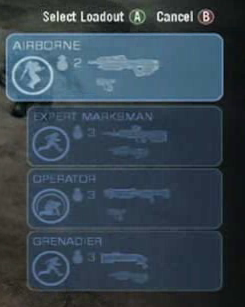 The “phases” of this mode are divided into three tiers. Advancing the game control of the objective leads to the progression of the tiers and with tier advancement comes better Loadout selection for the teams.

Both teams fight for control of objective territories with control awarding a team with the strategic advantage and additional options such as the use of vehicles.

“When you die, you spawn with your Fireteam-mate. Co-op style.”

Different coloured markers above the heads of players on the same team indicate spawn partners, when you die you can choose to respawn from a limited amount of locations (determined by the progress of the game) or by the side of your “partner”.

The main caveat about spawning beside your partner is that your partner need to be in a relatively safe position. If an enemy is near by, if your spawn partner is under attack or has grenades coming his way you will be unable to spawn near him.

Worse still, you spawn partner will know that you are wanting to (or needing to) spawn by him as small, flashing red arrows appear in the middle of the screen in addition to a message on the left hand side of your partner’s HUD. Don’t be putting your buddy under pressure – not a good idea if he’s caught up in a firefight trying to escape!

Fun Fact – the clips from older footage such as the multiplayer trailer and campaign clips features direct audio. Unlike how they originally presented, the clips shown at various times in the GTTV segment feature fully unmuted sound – you can really hear the guttural Elite cries and the meaty weapons fire!

Greandes are now larger and much more visable than before, in addition to have a trail line follow them when thrown

When using vehicles, players are shown not to take damage. This may be due to a special developer enabled God-mode or may be a sign that using vehicles is different. Will player be protected whilst their vehicle absorbs the damage until it’s reaches breaking point and explodes taking the the vehicles passengers along with it?

Does Invasion Slayer feature more than two team, maybe splitting each side into smaller teams?

Elites use Plasma Knives during their brutal assassinations.

Vehicle/Player primary spawn locations location seem to be protected with a special version of the shield door – one that maybe only allow free passage for the appropriate team?