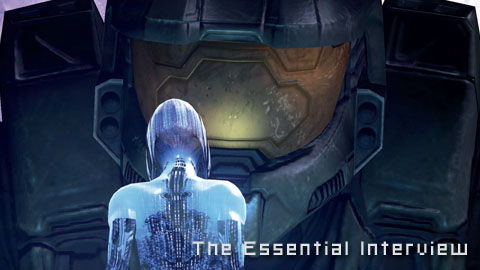 Halo as a franchise has grown over the past ten years. From a single video game released almost a decade ago, we now have a wealth of trans-media mediums available to indulge and enjoy the series. The Halo Encyclopaedia has been the unifying tome bringing the fiction together in one place and now we finally have a companion book, Halo: The Essential Visual Guide. The Guide, as the name suggests, takes a more aesthetically pleasing approach to presenting Halo lore to the fans but still manages to pack in a surprising amount of detail in between the beautifully laid out art.

Although a collaborative effort involving many talented people, the Visual Guide is headed by Jeremy Patenaude. Former Ascendant Justice author and now one of the writers at 343 Industries, Jeremy works on a variety of projects including both Halo Waypoint and many of the group’s officially licensed products. He’s a busy man and very tricky to pin down given his responsibilities and schedule but we’ve managed to convince Jeremy to take a quick break to talk with us about the Visual Guide.

How did the Illustrated Guide come about? Any particular inspirations?

The Visual Guide is yet another super solid product to come out of 343 Industries’ Consumer Products group, the folks who have been in charge of all of our official, licensed merchandise for several years now. They do a really great job of working with partners to determine what Halo fans want outside of the games and then they do everything they can to bring those wishes to the market. The Visual Guide was a great way to get new people caught up on the different facets of the universe, but it also had enough of the nitty gritty detailed content to be worthy of hardcore fans.

How does the book complement the Halo video games and extended universe?

At its core, the Visual Guide is a fact book for things players could find in any of the Halo games, essentially a condensed encyclopedia with the most up-to-date info we could compile. We did our best to fill in gaps and answer questions that the games left people asking, as well as to tie in the extended universe where it made the most sense. And ultimately, it is a Visual Guide so we definitely wanted to focus on providing great visual representations of everything. There are a lot of pretty pictures in there.

What kind of challenges did you have to overcome to produce the book?

Time, mainly – or lack thereof. Jokes aside, there were plenty of challenges on this project. Up front, there was a ton of information collecting from numerous sources. Some days that included collecting and analyzing models from the game’s code to get the most up-to-date, real world size for, say, a rifle. Others it included rereading a description of a battle a dozen times so that no detail was taken in without careful consideration.

The biggest challenge was reviewing the material once it was in the book, which was extremely time consuming and difficult because it involved (on top of making sure it was actually readable) double-checking every single fact on every page, and if you’ve read the book, you’ll know that there are more than a few facts in there. DK was extremely gracious in the amount of changes/tweaks/adjustments we were making until the very day they pushed the print button.

How does the Guide engage the hardcore Halo fan base?

The Visual Guide was originally designed as a “Top 200 cool things in Halo” book, which is why you see multiplayer maps sitting side-by-side with the Prophet of Truth and the M12 FAV. For the average fan, this setup works well because it’s chock full of all sorts of detailed info. Some of the hardcore fiction folks out there obviously want story to be the primary focus, so in those areas, we really tried to push the envelope in getting as much deep fiction as possible into the book, meeting somewhere in the middle at the end of the day. It’s a good overall blend of content with a significant amount of detail.

Does the Illustrated Guide contain any new lore or fiction not found in other sources?

The Visual Guide contains a ton of new information about existing topics and some pretty clever details on things which have never been disclosed before. Whether it’s a previously hidden service number, the birth name of a specific character, or the length of a vehicle no one’s measured before – this is the kind of territory the Visual Guide happily treads.

What kind of research went into making the Illustrated Guide?

A ton of research from everywhere in the universe went into this book. I definitely need to give a proper nod to Mr. Stephen Loftus, who has been a vital fixture in the Halo community for years now and helped out a great deal with content in this book. When we looked at the nature of this book and its extreme focus on details like size, scale, and composition, it seemed completely reasonable to get someone like Stephen to help us with reviewing the content and making sure everyone would be happy with the end result. Stephen was awesome in this regard and the book is enormously better for it.

In terms of actual research, everything was used and nothing was left out when we began filling it with content: the story bible, scale charts, fact sheets, game scripts, novels, in-game models, and ancillary web articles – all of this was checked, cross-checked, and used to generate the content for the book.

With every new release, the Halo fanbase continues to grow and expand. How will the Illustrated Guide help these newer fans?

The Visual Guide’s format and size make it easily digestible for new fans, helping them get up to speed on the different facets of the universe they might not be entirely familiar with without having to deep dive into a novel or play through every game. One page is dedicated to each entry, so people can flip it open without worrying about whether or not they’ll get lost in it. Hopefully, it’ll encourage some new folks to turn over stones in the Halo Universe that they might not have even noticed before.

Is there anything you wanted to include in the book but couldn’t?

The Bumblebee lifeboat to name one. There were actually a great many things we’d like to have included but there simply wasn’t room for it, especially given the initial scope of the book. That doesn’t mean that these things won’t ever appear in future books, just that we had to draw the line somewhere for the Visual Guide.

Will we see more introspective Halo publications (like this book and the Halo Encyclopedia ) in future?

I’d like to thank Jeremy for his time and the opportunity to do this interview.

The Essential Visual Guide is an ideal starting point for any new Halo fan and a fantastic companion piece for the hardcore type (ahem!). The guys at 343 and DK publishing have put a lot of long hours into this labour of love and it shows. The Guide is also notable for engaging the fan base like no other Halo product has done before. It has earned a place on our bookshelf and we’d recommend it to any Halo fan, new or otherwise. We honestly look forward to whatever future publications these guys are working on next.