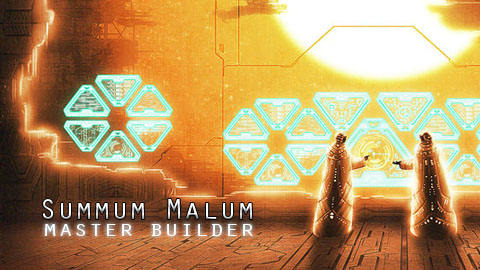 The Master Builder’s cold fury built until I thought he would call for pain projectors to surround us all. […] Looking upon his face, I wondered what resources he had acquired upon his rise. He did not seem wiser for all that, only more powerful, more cruel.
–Bornstellar, [Cryptum, C26]

Faber–often referred to by his title of Master Builder–may be a dark horse for a Halo 4 baddie, but the once-powerful Forerunner makes a lot of sense to threaten the status quo in the Milky Way. If you look at the possible rogues’ gallery for 343i’s upcoming trilogy like a suspect in a murder investigation, you find that Faber has means, motive, and opportunity to menace the Chief and everyone else–a golden triangle of malevolence.

Means — He built the Halos, and knows how to use them.

Faber designed the Halos after the conclusion of the Forerunner-Human War as weapons of mass destruction. Threatened by the specter of the Flood, the Forerunner Council greenlit Faber’s 12-ring Array over the objections of the Prometheans and the Didact [Cryptum, C12]. Begrudgingly, Faber’s weapons became harbors of a sort to study the Flood and preserve other species through the Libraries. But Faber wasn’t about to let the Council interfere with his vision.

“The Council forced a bargain with the Master Builder and decreed that Halos would also serve as sanctuaries for species across the galaxy, to preserve them against universal destruction. […] The Master Builder altered the Librarian’s plans.”
–Genemender [Primordium, C19P189].

Players have only explored the merest fraction of any of the Halo installations, and despite a basic idea of how the rings work, much is still not understood. Moreover, Faber’s control over the construction of the Halo Array via a single guild means that some aspects of the ring’s design might have been deliberately hidden from the other members of the Council. It’s hard to imagine what more damage a Halo could do than the annihilation of a large chunk of sentient life, but Faber’s ambition, sense of superiority and ruthlessness wouldn’t mean something worse is out of the question. The Dyson Shell of Halo 4 bears more resemblance to the Shield Worlds we know were the Didact’s chosen defensive measure, but as of yet we don’t know enough to tell who built Requiem.

From Faber’s point of view, everyone has betrayed him–the Didact, for opposing his final solution; the Librarian, for undermining said solution; Mendicant Bias, for being corrupted by the Flood; the Primordial, for using him for its own purposes; and the Forerunner Council and perhaps whole rates of Forerunner, for stripping him of his position and rank.

Suffice it to say, he might be holding a wee bit of a grudge. Cryptum shows Faber has little love for any other species, particularly humans, and his actions have been considered barbarous by his own kind.

Against all Council instructions, [the Master Builder] used this most hideous weapon to suppress a mere rebellion. The Master Builder, in command of a weapon capable of destroying all life, had violated the deppest precepts of the Mantle. Many Lifeworkers and Warrior-Servants on this installation went into open rebellion against the Builder. They were suppresed.”
–Genemender [Primordium, C19P187].

His antagonism towards the Chief and Covenant would be understandable–especially towards the Reclaimers who would deign to inherit the Forerunner’s place in the galaxy once again. Though the UNSC and Covenant ultimately dealt a crushing blow to the Flood,  the Parasite is likely still a threat, and Faber might push for his final solution now that there is no Council to stop him.

As far as Chakas–and apparently the Didact/Bornstellar–know at the end of Primordium, Faber was killed on Installation 07 in the ensuing chaos of Mendicant Bias’ attack on the Forerunner capitol [Primordium, C42P374]. But there is room to doubt that account. Perhaps he’s spent the last millennia holed up, safe from the Halo effect (if someone knew how to avoid obliteration, it would be him), plotting for his ultimate return like all good villains. Why he has waited so long is unknown–but perhaps the failsafe misfire of the Halos and the Ark brought him back. In the face of the apparent death of his kind and the desecration of his legacy by lesser species, it just might be time for the Master Builder to go on the warpath and show what the true wrath of the Forerunners looks like.