A Tale of Two Cortanas

They’ll pair you with another A.I. Maybe even another Cortana model if Halsey lets them. It won’t be me… you know that right?
—Cortana to Master Chief, Halo 4

Halo Infinite is a game not about names, but titles. Spartan John-117—the main character of a franchise that has almost always referred to him by his rank/title of Master Chief—is plucked from space by “the Pilot”. In the Xbox Showcase’s brief story trailer, he talks with an AI referred to as “the Weapon”. In the E3 2020 campaign gameplay, there’s mention of “the Harbinger”, a mysterious ally of the Banished. The more we see from the game’s campaign, the more that deliberate choice hangs over everything we know of the story.

While the June Xbox Showcase’s focus on multiplayer was expected, the short additional scenes from campaign were a welcome bonus. 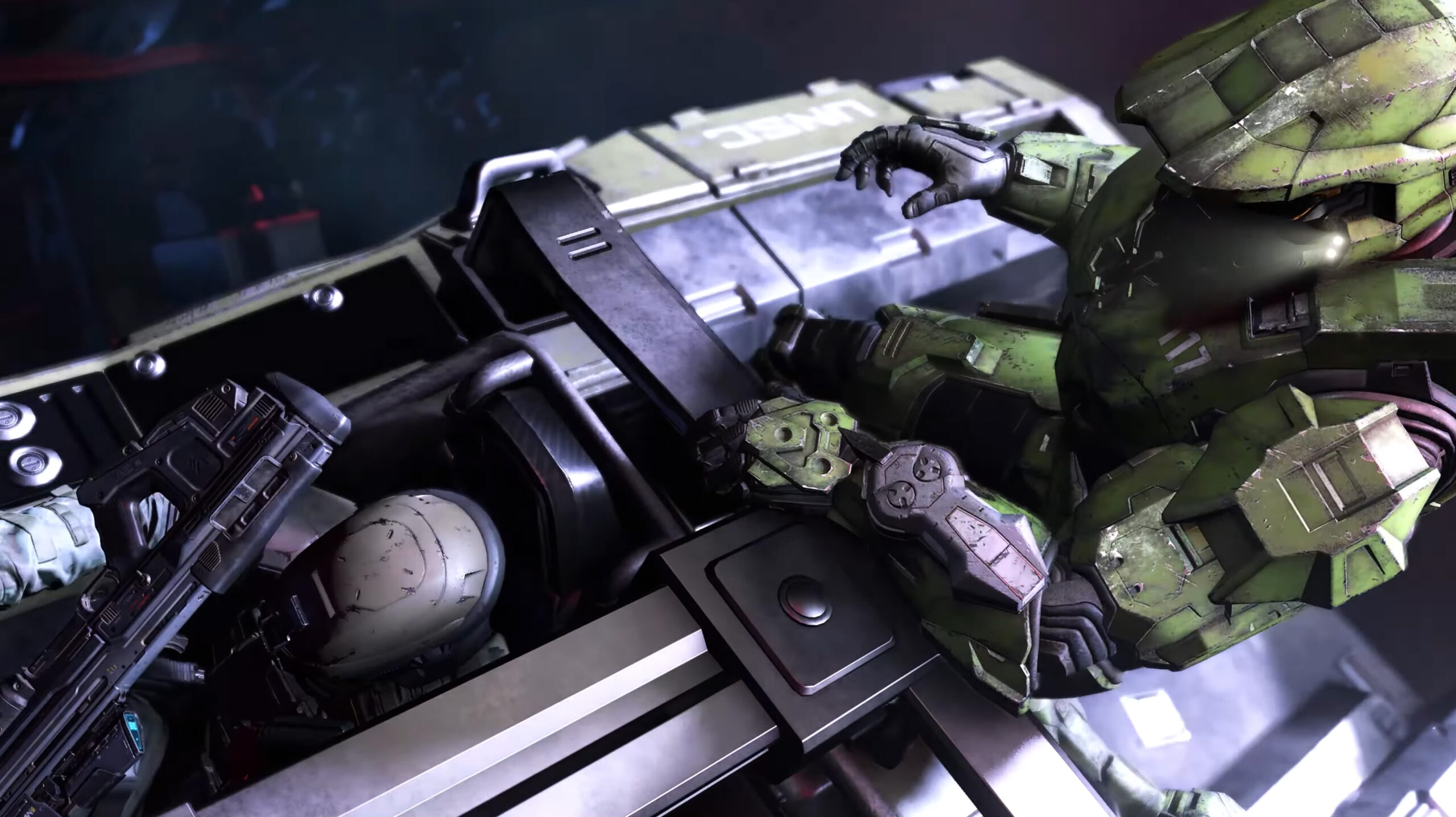 The first scene appears to take place directly after the “Deliver Hope” cutscene’s end. A somber sojourn into vacuum replaces the epic dun-dun-dun-DUH and blinding, anticipatory light of the trailer. Chief is coasting through a literal graveyard of people and scrap. He gives brief, respectful consideration to the dead soldiers he strips for weapons as he pushes through to a Banished ship, and presumably the start of gameplay. At the end, we hear a voice:

I need you to understand. There’s not much time… If you knew how you were going to die, how would you live your life differently?

Warning: Hitchikers may be escaping convicts

The second campaign snippet takes place in an unknown location of Forerunner origin. Here, Chief talks with the aforementioned Weapon. This is clearly Cortana yet not Cortana. She matter-of-factly informs Chief that “the rogue AI known as Cortana is gone. She’s been deleted.” Her instructions, and by extension the UNSC plan, was for the Weapon to infiltrate the installation (presumably Zeta Halo) and secure Cortana for retrieval by Master Chief and eventual destruction. Chief’s confusion suggests that the plan went awry.

Voice actress Jen Taylor has done an excellent job in previous Halo games distinguishing between Cortana and her creator, Catherine Halsey, but her portrayal of the Weapon is another example of her talents, and that of Infinite‘s animation team. Everything in the interactions between Chief and the Weapon highlight that, as Cortana predicted in Halo 4, this might be “another Cortana”, but it’s not her. Cortana displayed her avatar as a self-possessed, youthful version of Halsey. The Weapon, meanwhile, wears a military jumpsuit, and her entire demeanor is far different from Cortana’s poking humor. She stands at parade rest while conversing with Chief, demonstrating the emotional remove between the characters. When reciting her mission to Chief, her eyes even briefly dart upward, like a nervous student recalling information in a presentation. Compared to the bombastic Greek gods or featureless abstractions we have seen from other AIs, the appearance gives as much an indication as her name (or lack thereof) that she is less a person than a tool.1 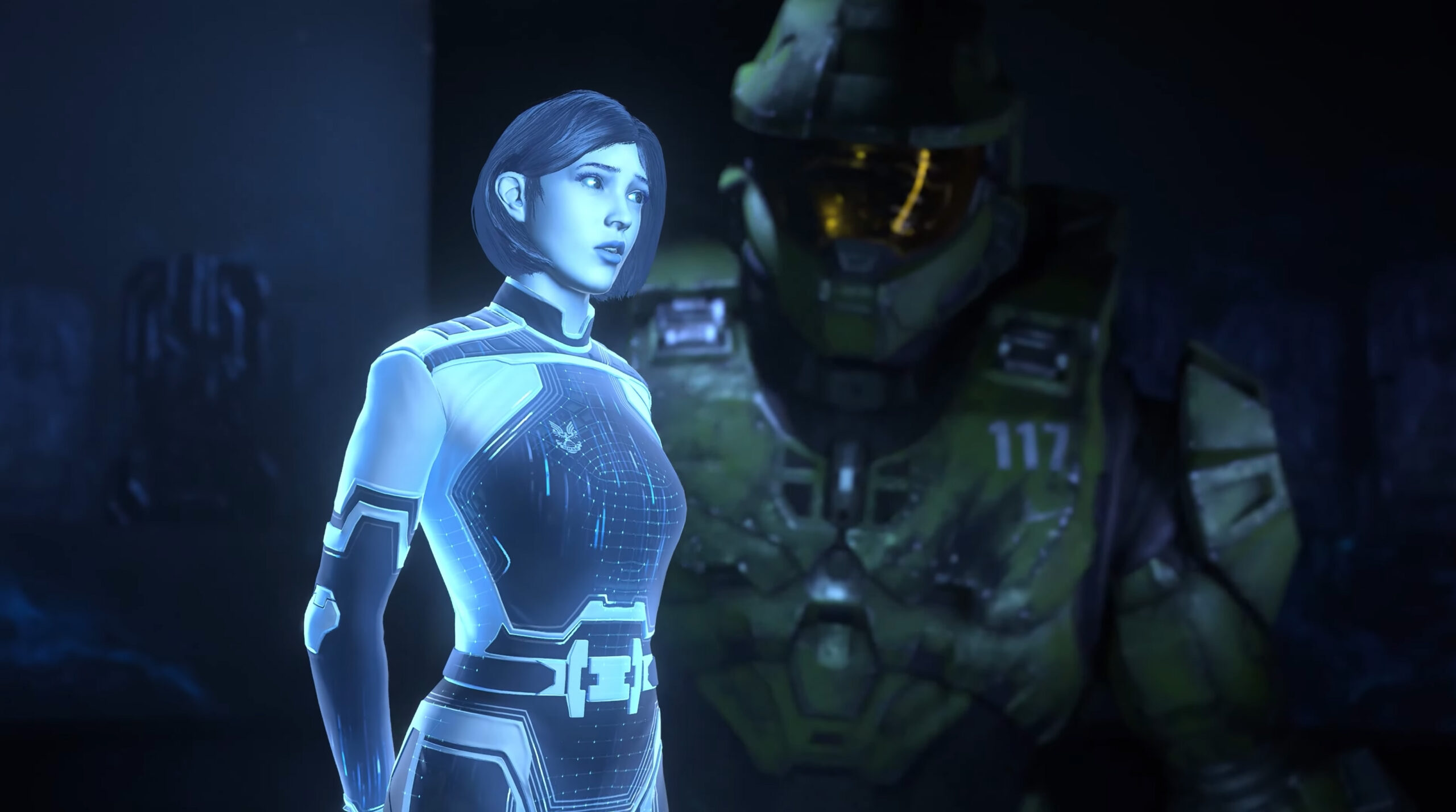 This facet of the Weapon is part of the story, but it’s also a part of the metatextual nature of Infinite. The developers have openly spoke of making Infinite a “spiritual reboot”, trying to make the game a good entry point for a new generation of fans, and that’s extremely tough to do while also continuing the plot threads of previous games. In an Xbox Wire post, creative director Joe Staten seems to make clear that they are committed to addressing the events of Halo 5, rather than sweeping them under the rug. In many ways, this Chief-AI dynamic returns to the roots of the entire genesis of the character—Bungie needed a way to deliver exposition and context to the player, and Cortana served that role. Players’ developed affinity for the character was a nice by-product.

The Weapon is clearly another AI derived from the brain of Catherine Halsey, using the cloned remains left on Reach and recovered by Blue Team during the events of Troy Denning’s Shadows of Reach. This information will probably never come up in the game, and it’s probably not necessary, either (see above re: accessibility). But the nature of the AI’s mission as stated is intriguing. The Weapon says that her goal was to “imitate” Cortana, which begs the question of who said imitation would be for. It could be the Banished. It could also be the other Created—striking down Cortana might be a serious blow to the AI faction, but one imagines they would not surrender peacefully even without their leader—especially when surrender is tantamount to consigning them to shortened lifespans and death.

More tellingly, after the success of the mission, the Weapon was supposed to self-destruct. This did not happen, a fact that perplexes the Weapon herself. The UNSC is concerned that any sisters of Cortana (and perhaps any AIs, period) are dangerous. The Weapon’s survival might be down to her common origins, as well; Halsey recalled that Cortana disabled the termination code implanted in her,2 which means that the Weapon’s survival might have been covertly expected by Halsey as well. The setup echoes the dichotomy of Offensive Bias-Mendicant Bias—a new AI expressly created to defeat the old one, limited in comparison.

Don’t make a girl a promise…

But what of the original Cortana? The dialogue during Chief’s sojourn outside sounds far more like “classic” Cortana than the Weapon, but there’s no way to know if it’s intended to be an event Chief is recalling or when that may have happened. Given the Weapon and Chief’s confusion as to the exact timeline of what happened, it’s possible Cortana was destroyed, but she may not be. Staten promises the fate of Cortana is “one of the Infinite campaign’s big mysteries”, and we will presumably piece together her status along with what happened in the time Chief was out of commission.

I cannot fault the Twitter takes that reacted with concern Cortana was being killed offscreen. 343 is no stronger to an excessive course-correction following negative feedback. But if 343 was really trying to sweep Cortana’s heel-turn under the table, I doubt they would make the character a central part of the mystery.

The Weapon could be 343’s way of having their cake and eating it too—dealing with Cortana as an antagonist while still having the beloved character return. But even there, 343 is not trying to pretend the past didn’t happen. The relationship between the Weapon and Master Chief is clearly different, but what form it takes is up in the air. Moreover, the lack of Prometheans seen in trailers or leaks, and the need for the “impersonation” by the weapon, suggest that we may actually only be wrapping up Cortana’s storyline in Infinite, not that of the Created.

There is one other intriguing piece of dialogue to also mention: the hidden dialogue from the “Deliver Hope” trailer:

This dialogue sounds much closer to the Weapon than Cortana, and suggests that the Weapon is not actually aware of her own origins before meeting some part of her sister. Perhaps the UNSC hid the truth of her origins, as they were afraid that she would waver from her mission? Likewise, this dialogue further suggests Cortana is not gone, certainly not completely.

These sharp differences between Cortana and the Weapon suggest an interesting inversion of the arc of Halo 4. There, Cortana asked Chief which of them was really a machine—Chief single-mindedly pursuing his mission, while Cortana grappled with her mortality. But what we see of Infinite has pushed Chief’s humanity to the fore—his reassurances to the Pilot, his gentleness with his fallen comrades, and his offer to the weapon whose purpose is over a new goal, a new mission. Perhaps the arc of this new relationship is Chief helping the Weapon to discover the humanity she was denied by her creators.

I doubt the Pilot will remain nameless for the entirety of Infinite, and I doubt the Weapon will either. She isn’t Cortana, but she doesn’t need to be. Players discovering their identities beyond devices for exposition and navigation is going to be a central part of the story. Like with Combat Evolved, we are peeling back the layers of archetypal titles and roles, to find the real characters lying beneath. And if Master Chief is the face of the franchise, Cortana—and her legacy—is the series’ beating heart.