In the last two weeks, we got three new live-action spots for Halo Infinite’s “Become” campaign. Titled “Unspoken“, “Project Magnes“, and “Lightbringer“, these are the followup to the “Step Inside” trailer that aired alongside the now slightly-infamous E3 2020 gameplay preview for the game.

Taken by any measure of “selling a video game predicated on shooting aliens”, these spots are a bit mystifying. The Master Chief, iconic hero of the franchise, does not appear (although for a faceless character, it’s an open question on whether his armor schematics count as a cameo.) These are not bombastic space operas, but quiet, small-scale and character-driven pieces.

A bunch of comparisons have been drawn between the “Become” campaign and the “Believe” campaign for Halo 3, not least of which by the advertisers responsible for both.1 Originally TAG SF, then agencytwofifteen, and now 215 McCann, the San Francisco agency is no stranger to Microsoft, having produced advertising for Xbox for years, as well as a slew of Microsoft’s other products—including the Zune (remember the Zune?) and the Kin (remember the Kin???)

It’s hard to overstate how influential Halo 3‘s “Believe” campaign was. Halo 2 had sold so many copies that it eclipsed the weekend box office takes of blockbuster films, and now Halo 3 was intentionally being marketed as a cultural touchstone, a massive media event. But Halo 3‘s “Believe” campaign was, in a word, incongruous. The commercials for the game featured lots of gameplay footage of Master Chief and allies being a badass, complete with the requisite explosions, and the other live-action material for the game—chiefly, the live-action remainders of the Halo film that never was, the “Landfall” shorts, were action-focused and gritty.

But “Believe” is quiet. Understated. Its chief component was a massive, physical diorama of a Halo battlefield, with Chief at its center. The ad so famous that it was parodied by other video game ads featured no explosions (or animated ones, at least), instead panning somberly over the battlefield while a Chopin prelude plays on a piano. Video gamers are not known for their appreciation of Chopin. Only at the very end does the otherwise-static figure of the diorama come to life, and the bold BELIEVE text hit the screen. It is not about selling a game directly, so much as selling a mood. Believe in a hero. Believe in the Master Chief. 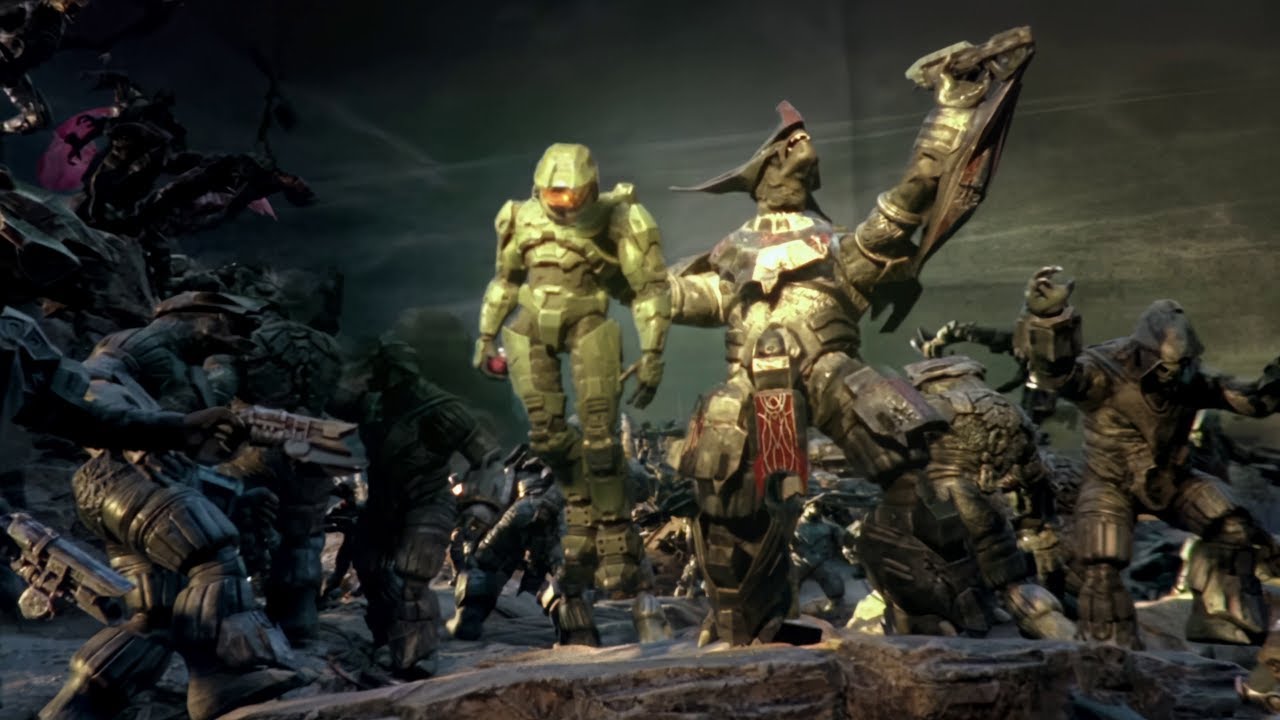 The supporting live-action interviews concern the “Museum of Humanity” where the aforementioned diorama sits. Old veterans discuss their experiences fighting in the war. They pick up their enemies’ weapons, they walk through the remains of the battlefield. They bear psychological and physical scars. The true horror of battle had been a part of Halo since the beginning—The Fall of Reach was appropriately evocative in demonstrating how terrible war with the Covenant would be—but the games operated from a remove. Master Chief was an untouchable badass. While some players painstakingly shepherded their marines through battles (I was one), they were ultimately expendable comic-relief cartoons, not people. “Believe” decided differently.

While the parallels to “Believe” are obvious with the “Become” ads, I think the more direct descendants of the “Become” campaign are found in 215’s subsequent Halo work. 215 would follow up on the focus on everyday soldiers with “The Life”, the live-action advertisement for Halo 3: ODST that doesn’t directly relate to the main characters in the game. Rather, the tagline is “We Are ODST”, presaging how Chief is both character and avatar for the player with the “become” branding in Infinite. Secondly, there is the “Remember Reach” campaign for Halo: Reach. Everyone remembers the flashier “Deliver Hope” live-action trailer featuring Noble Team, but it was also complemented with short vignettes of “regular life” on Reach, just as it’s about to be disrupted by the Covenant invasion. In many ways, “Remember Reach” had a similar hook to “Believe” in its focus on the heroes of the game, complete with a light sculpture that created a monument to Noble Team, but in comparison to “Believe”, the “Remember Reach” spots are much more about the character themselves, not their relation to some larger-than-life Spartans. The Reach that is being remembered here is the people on the planet, not a bunch of military hardware, and in some ways the ads do a better job reminding viewers of this than the game. To some degree, this might have been less a creative choice than a reality of filming in a pandemic world where more extras and tableaus would have been tougher, but the end result is still a remarkably straight line to focusing on smaller and personal stakes.

And that brings us to “Become”. The “Step Inside” trailer focuses on the technology that makes MJOLNIR, but ends with the evocation that it’s just a suit until someone is inside it. While Master Chief continues under 343 to become a realized character of his own, they clearly still want players to feel like they can easily inhabit the character, and by extension, be the hero. But the following “Become” ads highlight much different types of heroism. “Unspoken” details a soldier explaining to his buddy’s parents how their son died heroically, “Magnes” follows the repeated failures and occasional triumph of an engineer who designs the Grappleshot, and “Lightbringer” is less a real story than a tone poem, of people who risked their lives to deliver the materials needed for MJOLNIR and have no idea if they’re going to survive.

Do these ads successfully sell Halo Infinite? Like previous live-action efforts, I don’t know. But for a fiction fan, they’re a delightful glimpse into the content that will never be the focus of a book or a game (in a notable evolution, there’s nothing in these ads that is clearly non-canon, whereas “Believe” built an entire fictitious battle and implied Chief died on Earth.) But for a series now 20 years old and looking to persist, perhaps the greatest potential pitfall is to become a parody of itself. By focusing on the human element behind the power armor and plasma beams, Halo can keep itself relevant. As the franchise has matured, it’s only natural that its advertising has as well.