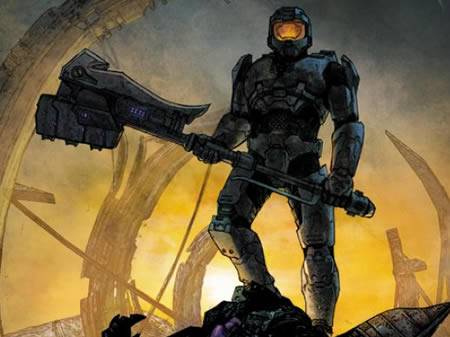 Before fans around the world had their first chance to Fight the Covenant in their living rooms and dormitories or step foot on their first Halo ring, the world of Halo had already been kick-started and previewed in the novel Halo: The Fall of Reach, written by Eric Nylund. Acting a prequel to the video game and fleshing out Master Chief’s mysterious background, the novel served to set the dinner table that the feast of the franchise would be served upon. Not only did it start Halo’s expanded universe, it also established a trend of setting up fans with expectations of what was to come.

Nylund returned to Halo fiction a few years later with Halo: First Strike, detailing the events after the end of the Halo campaign and yet again setting up plot threads and expectations for the second Halo entry. The trend faltered before the release of the third Halo game. Instead of a single book acting like a link in the Halo chain, tying the games together, it was decided that a comic novel, Halo: Uprising would fulfil this role.

Uprising originally appeared on time and went about this task in a different medium. However the publishing window for the mini series was missed by later entries resulting in the final part of the comic being published almost two whole years after Halo 3 came out. Something went wrong. Nylund went off to write another book, Halo: Ghosts of Onyx, but this title was a standalone story independent of the video games. The book was published before the launch of Halo 3, so if the decision was made to use his third Halo book as another fictional bridge then the problems of Uprising could have been avoided completely.

With the launch of Halo: Reach, apart from the original Halo novel by Nylund, the was no attempt to bridge the game with any other Halo entry by using fiction. Instead The Fall of Reach was serialised as a multi-series comic novel – and again the final parts of which have only been published – years after the video game has come out.

With Halo 4 it seems as if a renewed commitment has been made to provide fictional bridges for the fans. So much so in fact, that we have been presented with an entirely new problem.
The fictional ties into Halo 4 are stronger than any previous game. There are two book trilogies, both with entirely different settings and characters, that tie directly into the game. The Forerunner Trilogy by Greg Bear and the Kilo-Five (or UNSC) Trilogy by Karen Traviss. As fan it’s difficult to complain when there is so much quality fiction holding our hands and guiding us forward.

There is one problem. It’s the same problem shared by Uprising and the Fall of Reach comic serialisation. Both trilogies will not have their concluding and final parts published until after the launch of Halo 4.

If both trilogies are supposed to act as intermediaries, then I have to question how they will fully perform that function if both series are not allowed to conclude before we get our hands on, and go through the events of, Halo 4. There is assumption that the ending of both trilogies are being held back to stop Halo 4 being spoiled for us in advance. That raises the question why it was decided to make these trilogies go further and deeper than past links in the Halo chain. It seems this time they are deliberately planning another “Uprising”.

If we look at The Fall of Reach, First Strike and Uprising we get self-contained stories that extended and continue the overall fiction whilst maintaining the important momentum of linking the video game entries in the franchise. It’s a real shame that with the sheer volume of fiction we’re getting now (and that’s not something I could ever complain about!) that we couldn’t get a self-contained and completed story that pushed us forward and set the table for the next feast on time.

Feel free to check out older Beyond the Frontline entries here.