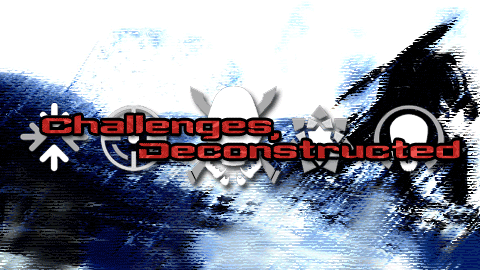 Meta-games are nothing new to the Halo series. From launching Warthogs on the beach of Silent Cartographer, to speed runs through each mission, rock slide mega battles and awe-inspiring SLASO runs, Halo’s freeform combat has had players experimenting with ways to play it from the day the first game released. As the series moved to the Xbox 360, Achievements were added to the mix, some of which began to nudge players toward accomplishing unique goals, none more so than Halo 3’s epic Annual. It is against that history that Reach’s Challenge system steps in, a fully realized system that spans game modes and gameplay systems to create a perpetual series of in-game goals.

Since Reach’s release, I’ve grown increasingly interested in the Challenge system. How it was constructed, the systems it draws upon, and how it’s being managed now that we’re a ways into Reach’s post-release life cycle. So, I began compiling them, with an eye toward analysis once it felt like we’d seen the scope they can offer. Now a good eight months after Reach has shipped, the daily and weekly Challenges have held few surprises, and it feels like the time is right to step back and evaluate the system as a whole.

I snagged the complete list of daily and weekly Challenges from the Halopedian Reach Challenges page from launch day on September 14 until May 1st (so as to grab full weeks) and applied a mix of manual and automated organization to categorize, slice, dice chop and shred them for evaluation. What I found was a Challenge structure that sits atop and draws from numerous other game systems in Reach across game modes, both vast in scope and limited in complexity. Before diving into the Challenges themselves, let’s begin by looking at how they are constructed. (I should note that while I am relying on Halopedian’s excellent archives, any errors in the analysis are mine and mine alone.)

One of the key aspects of the Challenge system is how fixed they are, whether they are pre-baked into the shipping game or can be dynamically updated over time. Grumbling about the quality of the Challenges on tap eventually led Urk check with Luke to address their flexibility in the Bungie Weekly Update from November 12.

Earlier in the week, he sat me down and showed off the full matrix of daily and weekly challenges we have at our disposal. I have to say that there’s some decidedly difficult stuff packed inside. SLASO runs? Ho, boy.

Before Luke showed off his adults only tool-set, I’d thought the challenges were mostly set in stone. Not the case. Over time, we’ll be able to roll out additional challenges and scale the payouts for the existing set to track with trending overall player progress.

Reading between the lines, there appears to be fixed set (or matrix) of Challenges baked into the game from which Luke and company can draw from, and that Bungie has ability to adjust the Challenges within certain parameters. Based off this note and others, it appears that Reach was designed with a set of templates built in to support the Challenges, and the changes Bungie can make are not the structure of the templates themselves, but to how they are used.

We got a glimpse into the template structure on December 3rd, when the “Single Wield” Challenge was initially published on bungie.net with part of the template unpopulated in the description. It read:

The implication of the {requird_count}  is the text we’re reading as the Challenge description is really a translation of the Challenge template and it’s populated requirements, which provides a helpful mindset from which to think of them. The description can be broken down into a set of criteria to be met in order to complete the Challenge and receive the cR payout.

What we don’t know is how flexible the Challenge templates are. It’s possible that kill count is not the only variable that can be adjusted in this particular template. For instance, the weapon class (small arms, ordnance, automatic, and so on) might also be variables, or there may simply be a unique template for each combination.

Regardless, that brief (quickly corrected) snafu provides a window into understanding how Challenges are constructed. Every gameplay Challenge has at least parts:

From there, additional criteria may be included such as requiring the kills to be with the small arms class of weapons, or within a single game.

I suspect these sort of templates are fixed in place with Reach, and it is the fields within the templates, their credit payouts, and the frequency with which they appear that Bungie can adjust now that Reach has been released. The only thing that gives me pause about this conclusion is Urk’s note, in which he said, “over time we’ll be able to roll out additional Challenges”. I take this to mean there are (probably more then than now) as yet unused Challenges, rather than new templates which can be created.

As the primary way Challenges are organized is by game mode, I’ll similarly structure this analysis around the game modes, beginning with the big picture. I’ll begin by looking at the daily Challenges for the gameplay modes individually, followed by weekly Challenges and credit pay outs, before circling back and seeing what conclusions we can draw from them in totality.

Before diving into the individual game modes, let’s take a look at how the Challenges are distributed across them. While most of the Challenges in Reach are built around the game modes, (Campaign, Firefight and Multiplayer), there is a light sprinkling of two other types, what I call the Any and Other categories.

The “Other” Challenges are linked to features outside of gameplay modes. The goal of these Challenges is to expose some of the ancillary features in Reach to players who might not otherwise spend time with them, similar to some of the goals baked into the Achievements.  Three have appeared a combined total of seven times, for uploading a film clip to File Share (encouraging players to use the Theater and File Share, respectively), link their gamer tag to Bungie.net (gain the extended benefits of file sharing and the player Service Record, and connect more directly to Bungie), and utilizing the Armory.

The “Any” category is notable for two reasons, the first being its flexibility. Challenges that fall under Any game mode can be completed by playing one or any combination of the game modes, and are part of a select few types of Challenges that Silver Xbox Live members can complete, because they can be completed in offline custom games (the others being Campaign Challenges). Silver members are in a pickle when it comes to earning credits in Reach: the Game Complete Bonus is throttled to that of the small token payouts that custom games are for Gold members, but they cannot  play matchmaking to earn Commendations or most Challenges. The Any category is a small lifeline for them to earn some credit payout which they are otherwise blocked from earning.

The other reason the Any category is notable is because there’s only one Challenge in it. Clearing out the template to read like the one from December, it reads,

The required kills have ranged from 50 to 500, and in total has appeared 91 times, and there is no pattern to how frequently or how many kills are required – it’s appeared as seldom as once a week, or as often as five. But kills are the only requirement for any Challenge that crosses game modes. There are no other medals and kill methods that span modes, such as assists, headshots, multikills and killing sprees, so it is odd that while an Any category was conceived, it was left with just a single goal within it. Additional requirements would have helped the category be much more flexible and add variety to the Challenges.

All in all, the 920 daily Challenges in my review window break down across game modes this way: 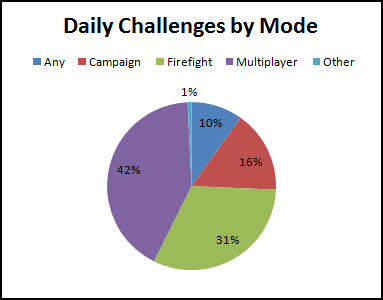 Multiplayer is the most popular game mode after launch, and so it makes sense that it takes up the bulk of the Challenges. It is a bit surprising to see Firefight so high, given the population proportions displayed on bungie.net, but as a fan of Firefight I won’t be complaining. As we’ll see when we get to the weekly Challenges, the mix there is quite different from the daily variety.

The mix of Challenges each week has held fairly constant each week, and the four Challenges each day usually cover two or more game modes, with two exceptions. Since launch, Thursday has been set aside as a Firefight day, while Friday is usually focused on Multiplayer, with only a couple of odd weeks breaking the pattern. Campaign is sprinkled around the rest of the week, with 1-2 Multiplayer or Firefight games in the mix. 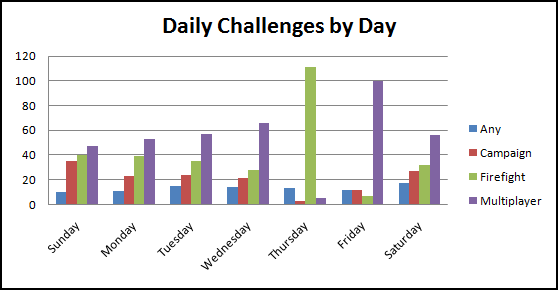 As a Firefight enthusiast, I like the predictability of Thursday’s focus and have come to look forward to it every week. While there’s some excitement in not knowing what the mix will be on other days of the week, I’d like to see a more fixed cadence established throughout the week, one that maintained the current proportions. In particular, it would be good to see one day similarly carved out for Campaign.