Multiplayer was likely the most difficult game mode to craft Challenges for because of how secondary meta-goals can have a hugely negative impact on player behavior, for objective games in particular. Any Challenge that alters player motivation to do something counter to their own health or their team goal would quickly turn the game into a hunt for Challenges, rather than the goal of the game type. A Challenge specifying a certain number of flag caps, for instance, would lead to players murdering their own in order to claim the cap for themselves, as would goals around scoring skulls in Headhunter or arming bombs in Assault. Stockpile would quickly degenerate into a game of who can grab and toss flags out and then back in again.

We’ve seen examples of this in some of the more poorly crafted Achievements from the series. Most recently, the achievement to land three melee kills with the Oddball in a single game attached to the Defiant Map Pack was a standout example of a terrible meta game: the goal in Oddball is to hold the ball for the longest amount of time. But because there is a goal of getting kills with it, players would instead rush toward the enemy. As a result, team Oddball in matchmaking was a catastrophe after the map pack released. Similarly, the Achievement to return flags in CTF created bunches of players huddled around a flag to return it, rather than the normal return tactic of one player on the flag and others defending him. It was quite the gift to multi kill seekers, though.

It is probably to avoid those kind of problems that the Multiplayer Challenges fall entirely around three basic tasks: completing games, getting kills, and earning assists, which are agnostic to Multiplayer game types.

To analyze the Challenges, I broke their descriptions down into their primary objective and secondary criteria. Starting with just that first objective, the Multiplayer Daily Challenges fall into a handful of categories; the numbers indicate how many Challenges with each objective have been used: 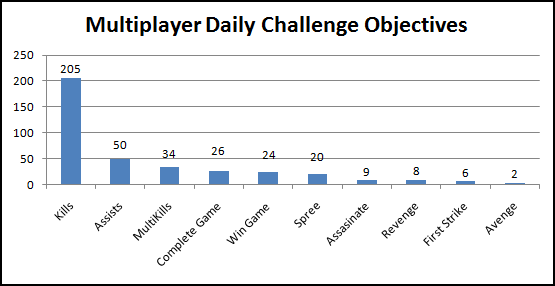 (Note that I’m lumping the different spree and multikill Challenges together for this summary; for instance, Double and Triple Kills.)

As might be expected, the primary type of Challenge is for kills, taking up 53% of the total. Aside from kills, the rest of the categories fall into assists, playing games (completing or winning them), sprees and multi kills, or achieving certain medals (Revenge, Avenge, First Strike, Assassinate). That handful of categories span the entire range of the Multiplayer Daily Challenges seen to date.

The winnowing process Bungie’s Challenge designers must have gone through is on full display here,  as there are no Challenges carved out for objective game types. In fact, there is no Challenge specific to any playlist, game type or even map. Much as the Challenges for killing enemies in any game type enables player flexibility, so too do the Multiplayer Challenges offer flexibility. These are actions which are universal to every game variant in the Multiplayer matchmaking mode (well, maybe not Rocket Race or Action Sack), and which are earned during the course of normal play. The lack of variety was clearly dictated by avoiding goals that could muck up player behavior.

The most used secondary goal is the requirement to achieve them in a single game, rather than over the course of the day. For example, here are two similar Challenges:

The former is what I call grind Challenges – ones that pile up over the course of the day over many games. The latter must be done in a single game, creating a meta-game of sorts. All told, 46% of all Multiplayer Challenges have had the requirement that they be completed in a single game, rather than over the course of the day. (Note: This includes some single-game Challenges which require only one task, such as a First Strike.)

For all of the non-kill oriented Challenges, the requirement to complete them in one game or over the course of the day is the only secondary one which is ever attached. The breakdown into their appearance is below. (A quick note on reading tables such as these. The left column will typically list the primary objective or variable, while the right columns will distinguish between secondary criteria that can be attached. The numbers indicate how many times that Challenge has been used. For instance, the first line here can be read, ‘earn Any Multi Kill in one game”, which has been used nine times, and “earn Any Multi Kill today”, which has been used five times.) 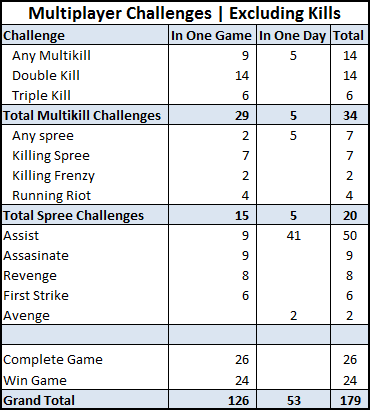 This is where the way the Challenge system is constructed begins to become clear. With the exception of the Challenges for winning or completing games, the categories above are all tied to medals. The way medals are bucketed in the player Service Record on Bungie.net are Multi Kill, Spree, Weapon & Style and Objectives (setting aside the Bungie.net medals). The above medals are all mostly from the Multi Kill and Spree categories, while the Challenges that pull largely from Weapons & Style are kill-based, which we’ll touch on next.

What jumps out is how few of the spree and multikill medals have been used thus far; the upper end of the Multi Kill medals are never used, and just ten of nearly 40 Spree medals appear. In particular, none of the weapon-based sprees make appearances, such as sword, hammer, sniper and shotgun. It’s possible that the Challenge designers felt that encouraging such specific sprees would distort player behavior, which is why the Any Spree Challenge was conceived: the weapon-based ones can be used to complete them and players are free to pick the one that suits them. Still, there are some odd omissions, such as truly challenging medals like Perfections and Exterminations (to be used sparingly, but lucratively paid off). There are relatively few Challenges in the Spree and Multikill categories that are truly challenging, as a single Running Riot or two Triple Kills in a single game are the limit.

Kill Challenges can likewise specify a they be completed in the span of one game or over the course of the day. Below is a listing of all of the kill criteria, and whether they have been required in one game or not. 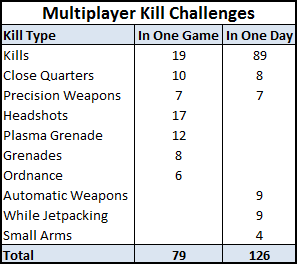 These Challenges fall into two categories: weapon classes (small arms, ordnance, precision, automatic, grenades) and style medals (plasma stick, beat down, Firebird, headshots). As with the Sprees, the omissions are worth noting. With the exception of plasma grenade sticks, none of the medals that specify a weapon are used (such as sniper or Spartan Laser kills), just weapon classes. Given the the lack of weapon specific spree Challenges, it makes sense there would be a lack of specific weapons required, to discourage weapon hoarding. But that effort cut out many of the more entertaining medals to receive. There are none involving vehicles, either using or destroying them, none for earning splatters or Wheelman medals, none for EMP overcharges or needle super combine explosions.

These two charts comprise the entire scope of the Multiplayer Challenges that have been deployed, which again just reinforces the limitations implicit by establishing a meta goal during a multiplayer game. Their foundation is the in-game medals and weapon classification systems, pared down to those which were deemed to have a minimal adverse effect on gameplay. The effort was largely successful, though there are a few exceptions. The Firebird (kills while jetpacking) or using automatic weapons require many players to use methods they might normally not, and which in many cases are downright inadvisable. Meanwhile the seldom deployed Avenge Challenge might encourage players to not save their team mate, but rather let them die and then try to Avenge their death. These examples just highlight how easy it is to distort player behavior in a multiplayer context.

While most Challenges can be completed in any playlist, some playlists are better for some Challenges than others, and Bungie has leveraged this on occasion. For instance, two Challenges to get 15 close quarter combat kills in a single game arrived immediately after the Grifball playlist was released.

All in all, the Multiplayer Challenges do a pretty good job of providing some incentives now and then to push for a certain feat during gameplay, such as stretch goals for kills, headshots, sprees, multikills and assists. For the most part, this is achieved without negative impacts on gameplay, which is a very tough balance to strike. The single-game Challenges create a fun secondary goal to work toward, while the daily ones provide regular players a reward for more normal play and allow players a choice in how they go about accomplishing them.

But what the Challenges gain in flexibility, they lose in variety. This is a necessary evil in Multiplayer, but in modes such as Firefight and Campaign, concerns about altering player behavior quickly dissipate. The opposite is actually true, as teasing players to try specific tactics against AI opponents can result in some entertaining meta games. Crackdown famously did this with great success with its Achievements. The questions are whether the in-game systems upon which Challenges are built in Reach can support them, and whether the Challenge templates were built with them in mind.