Similar in structure to Multiplayer Challenges, the goals for Firefight break down into a small handful of top-level objectives, to which a number of secondary completion criteria can be attached. Their breakdown is below. 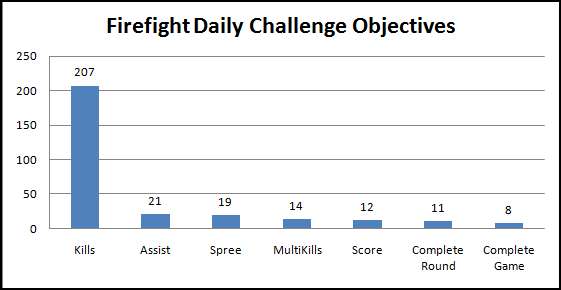 From this summary, we can see how Firefight Challenges begin to leverage some of the gameplay systems unique to the mode, with the scoring and round completion goals. What jumps out from this breakdown is the high proportion of Challenges devoted to straight up kills, at 71%. In Multiplayer, kill Challenges took up 53%. I had expected Firefight to be a bit more playful, requiring more sprees and other medals. There are some omissions relative to Multiplayer that would have been fun to keep, namely First Strikes and Assassinations; a Challenge to get say, 10 Assassinations in a single Round could be quite fun. Their absence is surprising, and it makes me wonder whether they exist but have just not been used yet.

Below is a more detailed breakdown of all but the kill-oriented Challenges, which we’ll dive into separately. 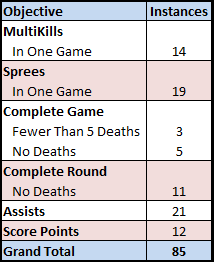 This breakdown is a disappointment, as there is even more caution around influencing player behavior than in Multiplayer. None of the spree or Multi kill Challenges are specific, but rather just require any variety, while MP featured some Double and Triple Kill Challenges, as well as requiring specific killing spree medals. Goals for Invincible medals (100 kill sprees) for instance would add some variety and actual challenge to them. Nothing as interesting as a Correction (15 plasma stick kills), or any of the other weapon-based sprees, are used. Nothing for Assassinations, or assist sprees, or even specific multikills (a meta-game most players already play is piling up the largest number they can – why not entice them further?).

The most interesting category are those for completing games and rounds with limited deaths, as that introduces the first fail condition to the set of Challenges, meaning they can be failed by player behavior mid-game. They’re also the only of these Challenges that significantly alter player behavior, to be more cautious. But it’s also where the limitations in the Challenge structure start to become clear, because of how clean the categories are. The death limitation is never applied to a specific context, such as in a Legendary game, or while earning certain medals or kills. This limitation puts a crimp in the already sparse variety on offer.

To the kill based Challenges, Firefight adds secondary criteria for maps, enemies and specific weapons. Let’s take a look at these each in turn. 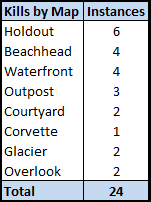 The addition of kills on a specific map is an interesting one. There’s only one reason I can think of that Firefight would include the category while Multiplayer would not: Multiplayer was to receive the bulk of DLC maps, and can have new map variants built from the shipping set (in particular, Forge World). Because the Challenge templates are baked into Reach, Multiplayer ones could only be crafted for the base shipping maps and not for future DLC. But with just one DLC Firefight map and no map variants possible, there is less to leave out in Firefight. (It’s telling that no Unearthed-specific Firefight Challenge has been used.)

There are no secondary criteria attached to any of the map based Challenges, just general kills, making each one a grind, rather than something to alter play to accommodate; they only alter matchmaking voting. The exception is a pair of Challenges to land 1,000 kills on a single map over the course of the day, both on Courtyard (we’ve since seen the same on Glacier). That’s…a lot of kills for a single map, and requires eight games of Score Attack, or a whole lotta Limited and Arcade.

Turning to the kill method Challenges: 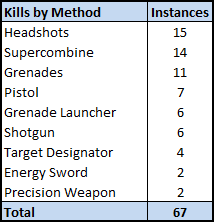 Unlike Multiplayer, Firefight does encourage some specific weapons to be used, which can be fun and provides incentives for a different play style. As with the map-specific Challenges, these do not feature any secondary criteria, just general kills using weapons or weapon classes. You can imagine some fun combinations, such as killing 15 enemies in one game with an Energy Sword, or earning a certain number of plasma sticks in one game. The inclusion of specific weapons raises the question of whether a template exists for each, such as Plasma Rifles? Maybe the Spiker? Why no Challenges encouraging players to use vehicles? Unlike Multiplayer, no Challenge has required these be completed in a single game, reducing all of them to daily grinds rather than in-game goals.

Finally, some Challenges just require kills in any setting or method, or of a specific target:

As with the other Firefight Challenges, what stands out is how few of the possible variants have been used, which raises questions. Challenges are on tap to kill Elites, Grunts and vehicles, but not Skirmishers, Jackals, Hunters or Brutes. Do they exist, and just haven’t been used?

The three Challenges that require they be completed in the span of a single game are interesting: they required 88, 111 and 188 kills, respectively. The first two fit comfortably inside a game of Score Attack, but the last is a truly difficult challenge; that’s over half of an entire Set worth of foes, before the bonus round, a tall order in a four player game. (Note: vehicle kills do not count as enemy kills; I killed 192 enemies in my effort to snag that particular Challenge, but failed as 10 were vehicles, courtesy of Beachhead.)

As with Multiplayer, some Challenges are better to complete in certain playlists. Vehicles don’t appear in Firefight Arcade (yet), and so Limited is the best option for them (and Beachhead the best option from there). There have been 16 Challenges to require 120 kills in any context – the same number as in a base Round of Score Attack. Hint, hint.

In the end, the Firefight Challenges are disappointing. While they take limited advantage of Firefight’s unique properties with scoring and no-death goals, they do so only rarely. There are even fewer types of spree or multi kill Challenges compared to Multplayer, when Firefight’s nature would welcome many more. And while there are some interesting additions in the form of weapon-specific kills or certain foes to target which expand the variety on offer, only a small subset have been utilized; and without secondary criteria, none are actually challenging to achieve. 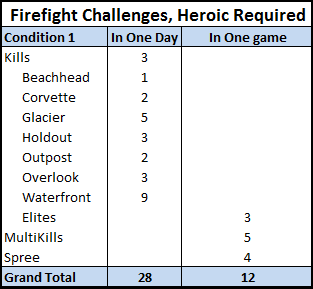 The only reason to specify a certain difficulty level for some Challenges is to differentiate them from those with a different difficulty level. Heroic is used in Firefight matchmaking for every playlist and gametype except one, Legendary Firefight Limited. This raises the possibility that there may be some Challenges that require other difficulties, such as Legendary, but they have yet to be used. The Challenges for a long time horizon were probably set in place around Reach’s launch, and since Firefight Limited was added several months after, it’s possible that the launch Challenges simply excluded them. Now that a Legendary option is included in matchmaking, here’s hoping someone adjusts them to incorporate a few Legendary Challenges and introduce some Firefight goals that are truly difficult – and rewarding – to snag.