Completing Challenges are not done just for the fun of it, of course. There’s the payoff in credits, the core of Reach’s player investment system. I actually began this entire exercise because of the BWU I quoted at the beginning, which I’ll repeat here with an emphasis:

Earlier in the week, he sat me down and showed off the full matrix of daily and weekly challenges we have at our disposal. I have to say that there’s some decidedly difficult stuff packed inside. SLASO runs? Ho, boy.

Before Luke showed off his adults only tool-set, I’d thought the challenges were mostly set in stone. Not the case. Over time, we’ll be able to roll out additional challenges and scale the payouts for the existing set to track with trending overall player progress.

The bolded comment is what piqued my interest enough to start tracking the Challenges. I was interested to see the extent to which the payouts rose over time. While the rest of the investment system is beyond the scope of this article, it’s important to note one aspect of it. As players increase in rank, the credits required to reach the next rank up gradually increase. However, that rise is softened because players earn more and more credits for each game played; the Game Complete bonus is tied to rank and has a gradually rising cap for each. Low ranking players max out at a few hundred cR per game, while Nobles earn over 3,800 for a long game. So it made sense that the Challenge payouts would likewise rise as the overall player population advanced in average rank, in tandem. There’s only one problem: it hasn’t happened.

Below is a trend line showing the total credits paid out by Challenges for each week since launch. (Note: I’m excluding the launch week, because Reach’s Tuesday release means the first week was missing one day, or four Challenges; the weeks included are full seven day weeks only.) 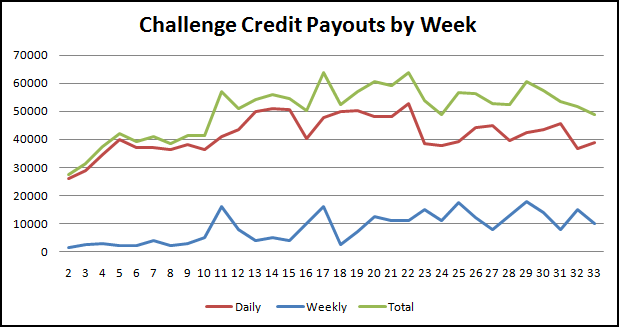 The graph shows that over the first five weeks of Reach’s release, the total credits paid out rose steadily, before hitting a plateau at about 40,00 cR per week. On week 11, payouts jump, and have since been moving erratically in a rough range between 50,000 and 60,000 cR per week. Overall, payouts have been flat for all of 2011, and have actually declined over recent weeks, even factoring in the steadily rising payout for the weekly Challenge LASO runs.

This means that as the Reach player population has increased in rank, the Challenge payouts have become an increasingly small proportion of the credits players earn; they have not scaled as BWU note indicated they would, and the way the Game Complete bonus does. Four months ago, the 5,000 cR for a brutal, no-death L.D. Legendary run through a Campaign mission would have been like hitting the jackpot. But moderately high players can earn that much in a game or two of regular matchmaking, making the payout for such a steeply difficult Challenge seem token.

I won’t pretend to know why Challenges have not scaled over time, as was indicated, but it general there seems to be a lack of detail given to the management of cR payouts. While aggregate payouts have held in a fairly narrow range, the actual payouts for individual Challenges have been swinging wildly about. None are more illustrative than the payout for completing Nightfall on Legendary without dying:

This is typical of many Challenges.

Challenge payouts could scale over time in any number of ways. The simplest would be to gradually ramp up the payout for an identical Challenge over time. Another would be to gradually roll out more and more difficult ones over time, and increase the cR associated with each. Or, a combination of the two. For Challenges such as the Nightfall one above, that is not happening, but rather the cR assigned appears almost random.

For many of the Challenges structured around repeated actions, such as kills, a pattern emerges similar to the overall credit payouts. The first several weeks show a gradual rise in credits, linked to both an increase in requirement, and payout for them. And then, after a few months, the pattern wears off and the credit rewards become erratic within a range. To illustrate with a typical example, below is a chronological listing of all of the Multiplayer Challenges to kill a certain number of players within a single game, the cR for each, and how many credits get paid out for each kill.

There is no pattern to how much the Challenge is worth, overall or on a per instance basis. Note that average payouts have dropped with the most recent appearances of the Challenge, a trend that follows what happened to overall payouts. This kind of inconsistency permeates nearly every Challenge category, with few displaying any link between the goals and the credits for achieving them. If the goal of a Challenge is to motivate players to try to achieve them, and the credits are meant to be part of that motivation, then they need to be managed more carefully than this.

The system could be much improved if the Challenges were reworked to incorporate a methodology to the reward system. The approach that I would like to see would simply scale up the payout as the requirements increased. For example, a more consistent system for kills in one game would look like this:

This is the exact opposite of the actual payouts, where the per instance credits actually dropped recently, offering less and less reward as difficulty increased. The credits per kill were 143 cR for 7 kills, 120 cR for 10, and 100 cR for 19 (!!) kills in a game. When a Challenge becomes more and more difficult, but the payout drops, it actually demotivates me to try and achieve it; a steadily rising payout in sync with difficulty would make more sense.

Similarly, a steady methodology for mission completions in Campaign is needed, as there does not appear to be any system in place to match difficulty with a proportional payout. I won’t laden this article with any more tables of Challenges, but suffice it to say the Campaign completion ones bounce about a lot. Is a Heroic run with Mythic really half as difficult as Famine? Why is a mission on Normal with Thunderstorm worth just 500 cR less than Heroic with Cloud, Tough Luck, and Catch on?

A method to assign a base set of credits for difficulty with an adder for each skull, along with another for requirements such as no deaths, would bring some logic to the Campaign payouts.

The recent swing of the mighty ban hammer, this time aimed (to my delight) at Firefight idlers, has brought with it a delicious wave of salty tears. But it’s also an illustration for how seriously Bungie takes the reward system, and how they don’t want players ruining other people’s games to suck down credits. The community would be served well by someone at Bungie applying the same level of care and attention to how Challenges pay credits as they do to resetting the credits of idlers.

The Challenge system in Reach is a vast one, pulling together numerous gameplay systems across game modes. Pulling back from the individual Challenges reveals the huge range of game systems and statistics from which they were built. 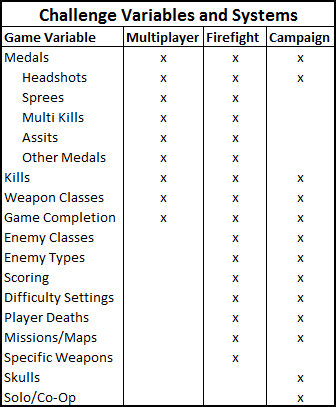 From these variables, many specific to each gameplay mode, nearly two hundred unique Challenge templates were hand crafted. The breadth they cover is tremendous, but perhaps because of that breadth there is a lack of depth and complexity to the individual Challenges. In the end, it is the inability for Challenges to re-imagined once Reach shipped that holds the system back.

One can imagine a system in which Challenges are not baked into Reach, but rather fed into the game through the online interface in much the same way as the Challenges are selected now. But rather than select a template to use, the system would string together the completion criteria in a more flexible manner, drawing upon the game systems. That way, if someone wanted to construct a Challenge to kill two Hunters in Firefight on Legendary, or to finish ONI with no vehicle kills and no deaths on Heroic with Catch on, they could. (To build a few random examples.) That would obviously be a much more complex and difficult approach to implement, but it seems like the natural direction for Challenges to evolve in. The cornerstone of a long-term support model will always be limited if the structure it’s built up on is fixed in the shipping game, rather than flexible.

Bungie has a history of implementing imperfect ideas in one game that get dramatically improved in the next, whether in game features like Scarabs in Halo 2 and 3, or Forge’s UI overhaul from Halo 3 to Reach, to the limited Firefight mode in ODST, now bursting with features in Reach. Reach’s Challenge system feels like one of those first generation features, a largely successful endeavor that, if reworked for a second go round, could become something really incredible.

I find Challenges to be the most compelling aspect of Reach’s overall player investment system, and one which I hope is expanded upon in Bungie’s next title with the kind of flexibility that lets the designers innovate with them long after the game comes out, rather than locking them into place once the code is pressed to disc. But even with those limitations, they are a welcome and fun way to nudge players toward meta-goals each day, a fitting compliment to Halo’s signature freeform combat.

I’ll conclude with a handful of data points that I couldn’t find a way to weave into the main story. If anyone has questions about the Challenges I didn’t cover, or want a bit of information sliced a different way, leave a note in the comments. I’ll keep tabs and reply with answers, assuming I can find them.